This is where I occasionally write about stuff. I'm also on Twitter.

So the internet is in an "uproar" over a woman getting the role of the Doctor on Doctor Who. I personally don't like the idea, as the character has always been a man, and I think he always should have been a man. I think the change is for the wrong reasons (i.e. political correctness and virtue signalling). I fully expect the writing to be ham-fisted, "What an improvement this is over when I was a stupid man," type crap.

I'm going to stop watching the show, but I already had decided that even before they announced they chose a woman. I'm stopping because the new head writer has never written anything that I thought was any good. All of his episodes of Doctor Who were ones that I thought were terrible. Same with the few episodes of Torchwood that I bothered to watch, and were written by him. I found also found his own show that he created, Broadchurch, to be an interminable bore. That's the real reason I'm moving on.

This gender-swap of the Doctor just confirms my decision to jump ship was the right move. In fact, given how poorly written the last few seasons have been, I think the ideal final episode of the show, for me, would have been the 50th anniversary special.

I'm not going to be one of those people crusading against the show and this change. I just decided the show doesn't appeal to me anymore and I'm going to move on to other things that I enjoy and still enjoy the occasional re-watch of old episodes. That's what I've done with Marvel comics and it was easy to ditch them after about 36 years of following those. I've only been a Who watcher for 12 years. (Although, after season one, I devoured the entire classic series.)

Anyway, like I said, I'm done with the show, but I'm not going to be one of those people that keeps watching it just so they can whine about it. Yeah, if the ratings hit rock bottom, I'll probably laugh a bit same as I did when Marvel's sales dropped or the Ghostbusters reboot flopped. I'll continue to roll all my eyes at the "fuck you white men, this is progress and if you don't like it you're a sexist" articles. But as much as I liked the show and find the change disappointing, I find it better to concentrate on stuff that I still enjoy instead.

I played the first of the three The Evil Within story DLCs. The first two are stealth games, as opposed to the main game's action-orientation. Unfortunately, they're the less enjoyable, "screw up slightly and you die, so it's not much fun" sort of stealth game. 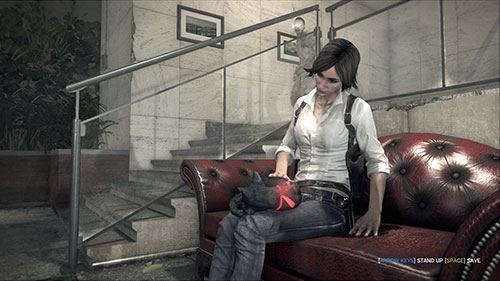 Once I finished off the first DLC, I decided to switch games. I picked up the season pass with all the DLC for Deus Ex: Mankind Divided the other day, so I played through the two story DLCs. I enjoyed those much more and can see myself replaying them in the (near?) future.

Still making my way through Kamen Rider Wizard, and I've been rewatching random episodes of It's Always Sunny In Philadelphia at dinner time. It's shocking how much stuff they used to do on that show that they couldn't do today.